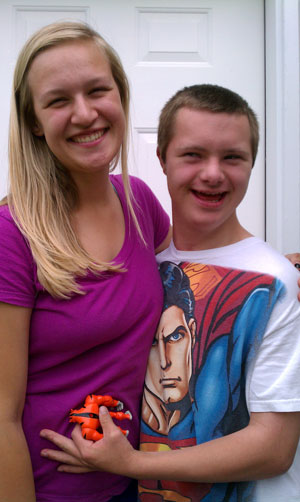 A Unique Bullying Prevention Model for Students with Disabilities

Many students with disabilities have few or no friends, and it makes it easier for someone to bully another student who is all alone or who doesn’t have someone looking out for them.

What is a “Peer Advocate?”

A student who looks out for other students who are being bullied or who are isolated from other students and helps them out by making sure that they are included and protected from harm.

Most students don’t like to see bullying, but they may not know what to do when it happens. Peer advocacy—speaking out on the behalf of others — is a unique approach that empowers students to protect those targeted by bullying. It works for two reasons: Students are more likely than adults to see what is happening with their peers, and peer influence is powerful. A student telling someone to stop bullying has much more impact than an adult giving that same advice.

“I learned that even though I am only one person I can change society.”

“Being a peer advocate makes me more aware when someone is not being included and it is a lot easier to include them and still have them feel comfortable. I have learned that there is so much more to me than just who I was before.”

How do I get my school involved?

Encourage the adults in your school, such as your principal, school counselor, or teacher to consider a “Peer Advocacy” project at school.

“Before Peer Advocacy, kids were eating alone, now we are sitting with them and hanging out.”

“Peer advocates should spread around the world.”

“Later in life I’ll be able to say I was a peer advocate, I made a difference! Will you?”

“I love being a Peer Advocate, it’s so much fun. I love it and am happy I joined. Before it was not as fun being in nothing then I heard about Peer Advocates and then that inspired me and I did it for the kids with disabilities and they rock!!”

“I think it’s important to be a Peer Advocate to let kids know they’re not alone and that others really do have their back. Even through some treat them differently, they are just like everyone else. They should be treated the same too. From this experience I learned all that. I think others should consider this too.”

What else can I do?

Be a friend! Watch out for those students, with and without disabilities, who might need your help and have their backs. To be a friend, you can:

If you know that someone is being teased, hurt, or harmed in any manner, you can:

Students who have been peer advocates said, “when I saw bullying happen, I…”

What Should You Do? Peer Advocacy | PACERTalks About Bullying Episode 24

Insights and advice from students as they think through how to respond to real life bullying situations. In this video middle school students from a “peer advocacy” group explore how to handle a scenario in which a student with down syndrome is being bullied.