Introduction to Show Me You

Dynamyte—an artist who artfully fuses classic R&B, sassy, sultry neo-soul and infectious pop—shares a little insight about herself and interest in building a better world for all. Check out her video, then watch and listen to Show Me You.

In this animated video created by Medha, a teen from Virginia, learn more about the month, how it got started, and ways to get involved. 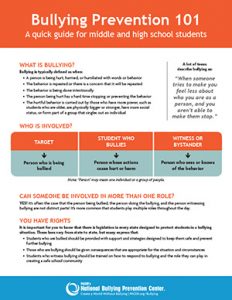 This quick guide for middle and high school students provides helpful information on what bullying is, who is involved, the roles played, and bullying prevention rights, along with ideas for advocacy and self-advocacy.

What you think is important! If you have ever been bullied or have seen bullying, share your anonymous responses.

Send a message of hope and support! Take the pledge and make a commitment to show that we are together against bullying, and united for kindness, acceptance, and inclusion.

The updated design of the Teens Against Bullying bookmark encourages middle and high school students with the message, “Together We Can Help Create A World Without Bullying.” The other side features a pledge for kindness, acceptance, and inclusion. 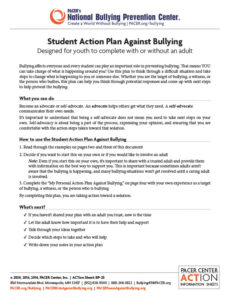 Ready to take action to address bullying? Maybe not sure how to start? As a student, bullying is something that impacts you, your peers, and your school – whether you’re the target of bullying, a witness, or the person who bullies. Bullying can end, but that won’t happen unless students, parents, and educators work together and take action.

Tell Us Why You Care

I was bullied off the soccer team my sophomore year. I think most of the damage done was in my freshman year. I was criticized instead of supported. I was constantly told how bad I was instead of being told how I could get better. I still hear their voices, telling me I shouldn’t play, telling me I was easy to score on. I was excluded from groups games. Nobody wanted me on their team. Their eyes were horrible. I am terrified to play any sport now, because I know I will be judged and compared to others as less than.