It’s important to remember that whether you’re being bullied, bullying, or seeing bullying, you’re not alone. A lot of people have gone through similar experiences. These books will allow you to look at the issue of bullying through someone else’s eyes, and maybe learn something about your own situation. Read these books on your own and maybe suggest them for a book club. 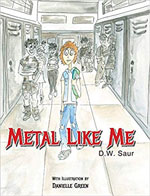 Written by D.W. Saur and Illustrated by Danielle Green

Vinny is a kid just like you, or is he? Vinny is from a family of metalheads and like his parents, he’s one too. As a child Vinny was unaware of his family’s differences, but as he got older, Vinny noticed that he was, in fact, not like other children. As the years passed, the more Vinny realized that being different is not easy. He noticed people staring, whispering to themselves as he passed, and sometimes shouting insults. Because of the differences, Vinny had a hard time making friends in elementary school. However, the lack of friends did not get him down, and as he entered middle school, Vinny was determined to find friends who were metal like him. Join Vinny as he shares his story of bullying, difference, coping, and perseverance.

Confessions of A Former Bully 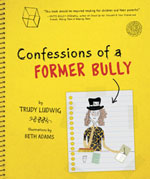 Ever wonder what goes on in the mind of someone who bullies? Katie never thought of herself as a bully. So what if she excludes kids from games or says some harsh things to her friends every once and a while? It’s not like she ever hits anyone. What’s the big deal? After Katie gets caught teasing a schoolmate, she faces consequences for her actions. The consequences help Katie realize that bullying has hurt not only the people around her, but her, too. Told from the unusual perspective of the aggressor, Confessions of a Former Bully provides kids with real life tips and tools they can use to help identify and overcome emotional bullying. An informative Author’s Note to Parents & Teachers and recommended resources are included. 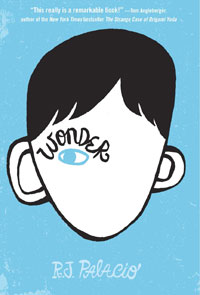 August Pullman was born with a facial deformity that, up until now, has prevented him from going to a mainstream school. Starting 5th grade at Beecher Prep, he wants nothing more than to be treated as an ordinary kid—but his new classmates can’t get past Auggie’s extraordinary face. Wonder by R.J. Palacio begins from Auggie’s point of view, but soon switches to include his classmates, his sister, her boyfriend, and others. These perspectives converge in a portrait of one community’s struggle with empathy, compassion, and acceptance. In a world where bullying among young people is an epidemic, this is a refreshing new narrative full of heart and hope. R.J. Palacio has called her debut novel “a meditation on kindness”—indeed, every reader will come away with a greater appreciation for the simple courage of friendship. Auggie is a hero to root for, a diamond in the rough who proves that you can’t blend in when you were born to stand out. 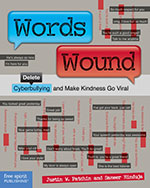 Vicious words and damaging photos exchanged through texts, email, or social media can result in humiliation, broken friendships, punishment at school, and even legal prosecution. In some cases, online harassment has contributed to suicide.

Written by experts in cyberbullying prevention, Words Wound provides strategies for teens dealing with cyberbullying as well as for those who have taken part in bullying others. The book gives teens the tools they need to keep themselves safe online, protect their digital reputations, and make their schools and their communities kinder places. Includes true stories by teens who have been cyberbullied and are working to eliminate online bullying in their schools.